In the spring of 1880, fifteen-year-old James Griffin left his father's farm in Terrebonne, Quebec, to train as a plumber's apprentice in Montreal. He started his own business in 1900, providing friendly and knowledgeable heating and plumbing services to Montrealers who were just getting used to the idea of indoor plumbing. The James Griffin & Son horse and buggy was a common and reassuring sight on the city's streets.

Over the years, the fleet of buggies grew, and the next generations of Griffin sons completed apprenticeships and joined the company. James' son J.P. Griffin took the reins in 1952, leaving them in the capable hands of his own son, licensed master plumber James G. Griffin, upon his death in 1965.

James G. Griffin headed James Griffin & Son until his retirement in 2012. His son, Patrick Griffin, joined him as co-president of the company in 2007. 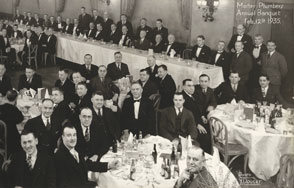 Patrick Griffin has worked in the business started by his great-grandfather since 1999. He earned his master plumber certification in 2007.

James Griffin & Son, family-owned and operated since the beginning, has been proudly serving Montreal's plumbing and hydronic heating needs for over a century and counting.